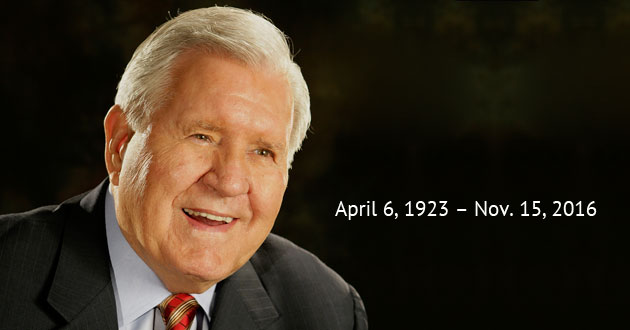 “Cliff and I were together more than 60 years and in all that time we never had an argument,” Billy Graham said in a statement on Tuesday (Nov. 15). “We had a few disagreements, but I can’t even remember those. It’s been a wonderful fellowship in our whole organization. There wouldn’t be a Billy Graham Evangelistic Association in the way it is today without him.”

Barrows, a native of Ceres, Calif., earned a degree in sacred music at Bob Jones University, and was an assistant pastor at Temple Baptist Church in St. Paul, Minn. On his honeymoon with his wife Wilma “Billie” Newell, the couple first met Billy Graham, and handled music for the evangelist’s Grand Rapids, Mich., crusade in 1947.

After that, Graham, Barrows and soloist George Beverly Shea — who died at 104 years of age in 2013 — were inseparable. The trio, backed by associate evangelists and guest musical artists, held campaigns across the United States and around the world. Their largest audience of 1.1 million was during the 1973 crusade at Yoido Plaza in Seoul, Korea.

Barrows led the mass choirs at Graham’s crusades, sang on occasion with Shea, and was the weekly host/announcer for Graham’s “Hour of Decision” radio broadcast. He was inducted into the Gospel Music Hall of Fame in 1988, and into the National Religious Broadcasters Hall of Fame in 1996.

“His uncanny ability to lead a Crusade choir of thousands of voices or an audience of a hundred thousand voices in a great hymn or Gospel chorus is absolutely unparalleled,” Graham wrote in his autobiography, “Just As I Am.”

Franklin Graham said that Barrows counsel and suggestions were invaluable over the years.

“Cliff Barrows was the voice behind my father for 60 years, emceeing the platform for his Crusades and ‘The Hour of Decision’ radio program,” said Franklin Graham.

“Not only was he one of my father’s closest friends, but he was a friend to all of us on the team and in the family. Growing up, and until the day of his death, I called him Uncle Cliff,” said Graham. “He was very much a part of our family. Our thoughts and prayers are with his wife Ann and the entire Barrows family.”

A public funeral service will be held Tuesday, Nov. 22, at 10:30 a.m. at Calvary Church in Charlotte. Barrows will be interred at a private ceremony at the Billy Graham Library.