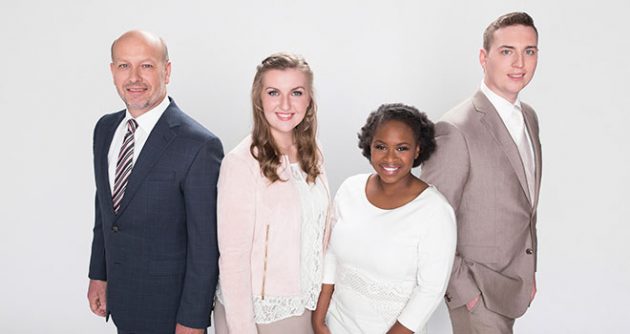 THE CRAGUNS are a dynamic, family group, comprised of husband and wife, Jordan and Elena Cragun, Ray Cragun (Jordan’s Father) and Savannah Cragun (Jordan’s Sister). Jordan has been singing professionally since 2008. Ray was a pastor for over 25 years, but in 2013 God led the family together, to embark on this musical journey.  Since that time, The Craguns have become known as one of the most talented, young groups in the country. The Craguns have quickly become a national touring group, touring from coast to coast and different parts of the world, on a full-time basis. They have been honored to perform to millions of people in some of the largest venues, on some of the largest radio stations and television shows in gospel music… The National Quartet Convention (Main Stage), The Blue Gate Theater, Silver Dollar City and Daystar Television, just to name a few.

At a Craguns concert you can expect to laugh, be challenged and leave encouraged! The Cragun Family is absolutely committed to effectively ministering the Gospel through song. They will do this through Spirit filled, Christ honoring, musical excellence for people of all ages. You are invited to a concert near you! You will quickly realize why The Cragun name has become synonymous with great gospel music!