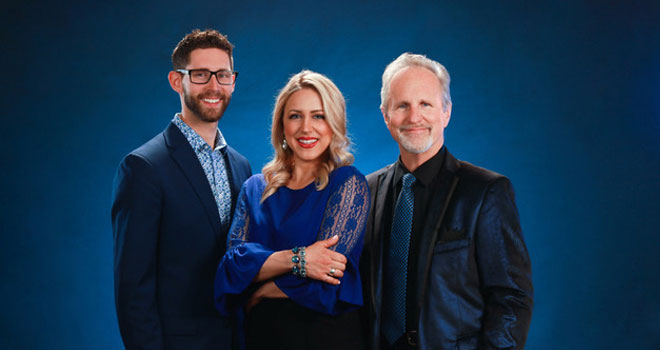 The Rykert Trio is a unique blend of family harmonies who sing contemporary and southern gospel, in addition to power anthems and classical hymns. The group has been singing and ministering in churches and performing arts centers throughout California, Oregon, Washington and Arizona since 2016. The Trio are also members of the Western States Gospel Music Association as of July 2018.

The Rykert Trio has emerged triumphantly from devastating news they received in 2015. Joe, (father) was diagnosed with Stage 4 Lymphoma. After the rigors of chemotherapy, a bone marrow transplant, radiation treatments and with many friends and family praying for him, his cancer is now in remission. The three of them are soloists in their own right, but had never performed together as a family group before. Joe had singing commitments lined up, but didn’t know if he’d have the strength to do them (after chemo, etc.). Joe asked his kids to back him up and thus the Trio began. Joe and the kids felt the calling of the Lord to minister and share with others the testimony and God’s work in Joe’s life.

In August of 2016, they won the grand prize and audience favorite awards at the Gallo Center for the Arts talent show (The Valley Talent Project), in which one of the judges was Robert Ulrich (casting director of the Glee Project and Quantico). This has led them to many concert bookings at concert venues – Gallo Center for the Arts, Great Western Fan Festival and the President’s Inaugural Ball at CSU Stanislaus.

​The Trio’s first album “Sometimes It Takes a Mountain” was released October, 2017. The Rykert Trio sincerely hopes and prays that their story and their music will encourage all to trust God with what ever challenges they may be facing. Their second album, “Great Is Thy Faithfulness” was released in April of 2018. You can find their first two projects on all musical platforms for downloads and streaming.​ Now in 2019, they have the begun the production and recording process in creating their first album of all original music. This album feature’s the title song, “Healed” written by their dear friend, Joey Coray.